Skip to content
You are here: Home / Blog / Blog / The Lowdown on Sugar Alternatives

The days of coffee with cream and sugar are long gone. Sugar, which once took up a single shelf in your grocery store, has become an aisle unto itself. It seems like a new study on the dangers of certain types of sweeteners appears every month, but sugar is an unavoidable part of our diets – and our children’s diets. So what should you stock your shelves with to ensure that your Sunday morning pancakes aren’t going to leave you with some very wound-up, sugar-laden children? 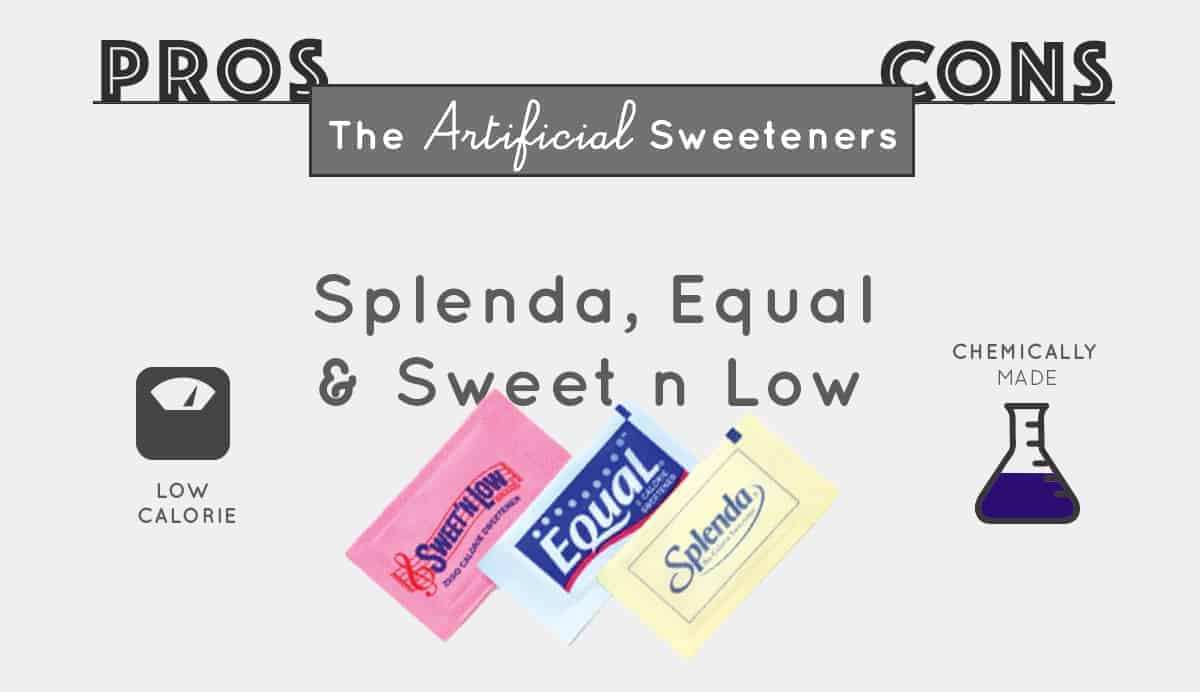 Cons: Artificial sweeteners have been linked to weight gain, although it is unclear if this is due to the sweeteners themselves or mitigating factors (e.g., this cake has Splenda instead of sugar so I can eat four slices!). Artificially sweetened beverages may increase the risk of heart disease, stroke, and dementia. You can find hundreds of horror stories about the purported side effects of artificial sweeteners, and while they aren’t all backed by science, they shouldn’t be discounted.

Sucrose is your basic, old-fashioned sugar you find in every pantry across America. Sugar is made by extracting sucrose from sugarcane or sugar beet plants, and then processing and granulating it so you get what you see on your kitchen table. Sucrose is made up of equal parts glucose and fructose.

Pros: Glucose can give you a boost of energy. If you’re feeling hangry, a little sugar can do a lot of good for your mood. Glucose is necessary for brain function, and is widely seen as the best type of sugar for your body – every cell needs it to operate efficiently.

Cons: Sucrose also contains fructose, which has been shown to contribute to and even cause all kinds of problems, from heart disease to bladder cancer. It’s bad for your teeth, since the sugar molecules start breaking down in your mouth. It can increase triglycerides, which can lead to a greater risk of heart attack or stroke. The glucose in sucrose also adds sugar to your bloodstream, which can be dangerous for diabetics. It’s also hidden in 68% of packaged foods, so you may be consuming much more of it than you intended.

Brown sugar is simply a less refined version of white table sugar. When white sugar is made, it produces molasses, which is then strained out. Brown sugar retains the molasses. It’s about 5% molasses and water, and 95% sucrose (which is 50% glucose and 50% fructose). Confused yet? For all intents and purposes, brown sugar is just white sugar with a bit of molasses.

Pros: Brown sugar has more water in it than white sugar, so 100 grams of brown sugar will net you fewer calories than 100 grams of white sugar. The molasses in brown sugar contains trace amounts of calcium, potassium, iron, and magnesium (although not enough to make any significant difference in your diet).

Cons: See ‘white sugar.’ Since brown sugar is nearly identical to white sugar, it’s got all the negatives of sucrose, except that the extra moisture in brown sugar requires air tight containers to keep the sugar from binding together and/or drying out.

Stevia is the only natural sweetener approved by the FDA, and it’s taking over the sweetener market. It’s extracted from the stevia plant, although many brands of stevia add ingredients like dextrose or erythritol, the latter of which could even be used as a pesticide. If you’re shopping for stevia, look for 100% stevia without any additives.

Pros: Stevia is a lot sweeter than sugar – somewhere between 100 and 200 times sweeter! A little bit of stevia goes a long way. Stevia doesn’t raise blood sugar levels as it breaks down into steviol glucuronide rather than fructose or glucose. It has no calories..

Cons: The type of stevia approved by the FDA is highly refined, so some argue that it’s not exactly natural. Its’ very sweet flavor makes it difficult to substitute in recipes requiring sugar, and some find that stevia has a bitter, anise aftertaste.

Coconut sugar is made from the sap of the coconut tree. It is similar to sucrose (table sugar) and brown sugar in terms of nutrition, flavor, and sweetness. In fact, coconut sugar is about 70-79% sucrose; the rest is split between fructose and glucose (the two individual components that make up sucrose).

Cons: Coconut sugar is essentially table sugar in a different (more expensive!) package. The additional nutrients aren’t significant enough to make a contribution to your diet unless you’re downing a half cup of coconut sugar a day. At that point, the cons from the fructose would far outweigh any marginal benefits you’d get from the nutrients.

Maple syrup comes from the sap of the maple tree. It’s about 60% sucrose and less than 1% each of glucose and fructose. The rest is water. Be very careful to buy 100% pure maple syrup, as many syrups marketed as ‘maple’ are actually variations of corn syrup.

Pros: Maple syrup has several compounds that are beneficial to the body, including some that are unique to maple syrup. These compounds act as antioxidants and anti-inflammatories. Syrup has a unique flavor that many find delicious.

Cons: Maple syrup is still a sugar. Overall, sugars do not contribute to a healthy diet. Pure maple syrup is the lesser evil due to its unique compounds, but it is still broken down into glucose and fructose, and too much fructose can lead to heart disease and other health problems. It’s also sticky and hard to use in recipes.

Honey is made from the nectar bees collect. You can get different types or flavors of honey depending on where the nectar originated. Like maple syrup, many products labelled ‘honey’ have been diluted with corn syrup. Your best bet is to buy honey from your local farmer’s market or co-op; it’s more likely to be pure.

Pros: Honey has less than 40% fructose, while table sugar has about 50%. It also has more complex sugars; your body uses more energy to break those down, so you end up consuming fewer calories. It also has trace amounts of vitamins and minerals from the nectar.

Cons: Honey can harbor botulism spores, so children should not eat it before their first birthday. The vitamins and minerals you get from honey are so minute that they don’t matter unless you’re consuming huge quantities of honey. Like other types of sugars, it contains fructose, which isn’t good for you.

Agave nectar is good for vegans because it’s not an animal product or byproduct. It’s made from the sap found in the blue agave plant. Agave syrup is about one and a half times as sweet as sugar.

Pros: Agave has a low glycemic index (just 17; table sugar is 60!), so it’s better for diabetics who need steady streams of blood sugar rather than large spikes.

Cons: Although it’s touted as natural, agave is still highly processed. That low glycemic index is the result of high amounts of fructose – a whopping 90% of agave syrup is fructose, which isn’t just bad for your heart. Fructose has been linked to poor performance in memory and learning, too. In terms of fructose content, it’s far worse for you than table sugar. Plus, the distinctive flavor makes it difficult to use in recipes.

So what sugar alternative is the best?

The natural sugars are all some combination of glucose, fructose, and sucrose (which is just a combination of glucose and fructose). The healthiest sugar alternative is the one with the least amount of fructose – maple syrup. But whether or not you’re adding maple syrup, brown sugar, or Splenda to your coffee, moderation is the key. You get plenty of sugar in the food you eat every day. If you can, avoid added sugars – especially in processed foods. We’ll take our coffee with cream, no sugar!