You are here: Home / Resource Center / Articles / Lifestyle / The 411 on Teaching Your Child a Second Language

The 411 on Teaching Your Child a Second Language

We live in an increasingly bilingual world. While most people in the European Union speak more than one language, most Americans only speak one. Why does that matter? Well, the benefits of being bilingual are plentiful. People who speak more than one language tend to have more grey matter.  They perform better on tasks requiring attention, inhibition, and short-term memory. Using a foreign language can even help you make better decisions! So how can you score these benefits for your child?

Researchers at Cornell University say that the most effective way to teach children a second language is to put them in an immersive environment. Storytime in other languages can help with that, but if you’re feeling especially committed to your child’s language proficiency, consider hiring a nanny or sitter who speaks a second language natively. This may make your search for the perfect nanny or sitter that much more difficult, but it’ll be worth it when your little one says “I love you” in another language!

Does your child have a favorite book? You know, that one you’ve read over and over again until you’ve both memorized it? Try picking up a copy of that same book in another language. The familiar story will keep your child entertained, and the two of you will be able to translate the words as you go.

Language immersion programs and preschools are growing in popularity. In fact, 25% of all elementary schools now offer instruction in foreign languages. Most cities are home to several immersion preschools predominantly featuring Spanish, although French, Chinese, and other languages can also be found around the country. You may want to choose a language that you’re already somewhat familiar with, though. When your toddler starts wailing for something in another language, it’d be nice to know what he’s saying!

It’s Not Too Late!

Don’t panic if your one-year-old’s first word was ‘ball’ rather than ‘pelota’ or ‘ballon.’ Although earlier is always better, researchers say that the golden window of opportunity for learning a foreign language doesn’t close until around ten years of age. With time and hard work, even adults can become proficient at a second language, though they aren’t likely to achieve the proficiency of a natural speaker.

If your baby is learning a foreign language, it’s the perfect time for you to tackle it, too! Mommy and Me Spanish Class, anyone?

Everyone Wants to Touch My Belly…Help! 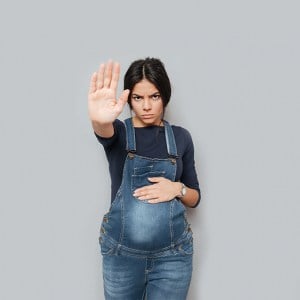