Skip to content
You are here: Home / Blog / Articles / Lifestyle / The 411 on Flat Head Syndrome 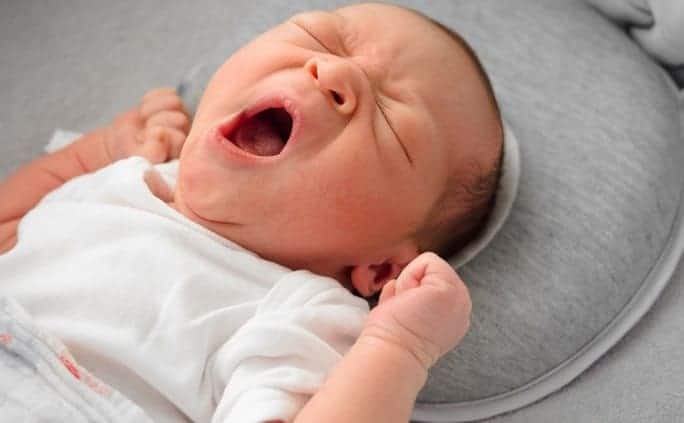 Heads up! Today we’re talking about flat head syndrome, also known as plagiocephaly. Just like its name, it occurs when a flat spot develops on the back or side of an infant’s head.

Why does it happen?

Flat head syndrome can occur due to a baby’s bones not hardening until several months after birth. Having soft bones is important for the first few months of life because it makes passage through the birth canal easier, as well as provides amble room for a baby’s brain to grow. In saying this, it’s also room for baby’s head to change shape, too. It’s fairly common, occurring in roughly 50% of children, and has generally mild effects. Muscular torticollis, a condition where an infant’s neck muscles and stiff or imbalanced, can also lead to plagiocephaly.

Breaking it down further, there are two types of this condition:

Positional plagiocephaly – This is the most common type, accounting for up to 50% of babies. When a baby has the same sleeping or lying position, this new shape can take form. If there’s more than one baby in the womb, there is also a higher chance of flat head syndrome due to a tighter womb space. This type is more common in premature babies than full-term. Preterm babies are also at a higher risk, as their bones are softer.

Congenital plagiocephaly – This type is a rare birth defect that occurs when fibrous spaces between skull bones (sutures) prematurely close, resulting in abnormally shaped head. It occurs during fetal development and can run in families. A doctor may suggest surgery to relieve pressure in the skull and allow the brain to grow normally.

It could take several months for signs to show, but it can also appear when a child is around 6 to 8 weeks old. Signs include: a flattened area on the side or back of the head, ears that appear uneven, a bald spot in one area of the head, bony ridges of the skill and lack of a soft spot on the head. Babies are at most risk during the first four months, before they can roll over on their own.

What are the risks?

The good news is in most cases, it doesn’t affect brain development. As time goes on, cases improve as the child grows and continues to practice sitting, crawling and standing.

There are a variety of treatments, most of which are very low impact. Providing ample tummy time can reduce risk of this condition. Tummy time also increases muscle strength and neck control, so it’s a win win! You can also change feeding positions, switching between arms. Counter-position therapy involves changing up their sleep positions. While the American Academy of Pediatrics recommends all babies sleep on their back to reduce Sudden Infant Death Syndrome, you can alternate their cheek positions from left to right. Molding helmet therapy is also a used treatment. In this method, baby wears a custom-molded helmet (or band) that gently helps to form the head into a more even shape. This treatment is typically for more moderate to severe cases and takes about 12 weeks in total. In serious cases, a doctor may suggest surgery in cases of congenital plagiocephaly to relieve pressure in the skull and allow the brain to grow normally.