Whatever you do, don’t take what we’re about to say with a “grain” of salt! The recent increase in desire for non-processed foods & higher rates of gluten intolerance has given the idea that all grains are bad for you. The truth is: yes, processed grains, such as white rice, don’t have much nutritional value, however, plenty of grains out there are chock-full of nutrients and vitamins! The key to healthy grains is consuming them in their purest form, meaning no refining or milling. We challenge you to use one of these top 10 healthy grains the next time you’re cooking for your family! 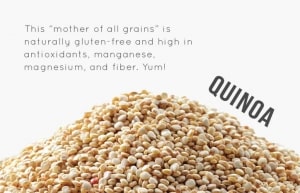 After the popularity of this grain in the last couple of years, you may be saying, “quin-WHAAA?”. What’s the big deal about quinoa? Well, like other ancient grains, quinoa has seen recent popularity due to its extensive health benefits. Dating back to 5,000 years ago, quinoa was known by the Incas as “the mother of all grains.” Quinoa  is naturally gluten-free and is high in fiber, antioxidants, manganese, and magnesium just to name a few.It’s best served as a rice or oats substitute, and in purees such as this Green Chicken Quinoa Purée. 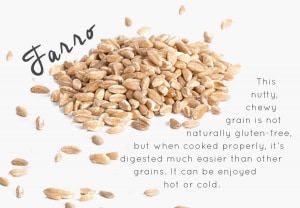 Farro is another ancient grain that has grown in popularity in recent years….but the story begins way back when since this grain can be traced back to many Mediterranean, Ethiopian, and Middle Eastern cultures. Benefits of farro include reducing the risk of asthma, inflammatory diseases, and diabetes. This grain is not naturally gluten-free, however, when cooked properly,it’s digested much easier than other grains. People describe the taste as “nutty” and chewier than quinoa. It can be enjoyed hot or cold, making it the perfect year round grain of choice. 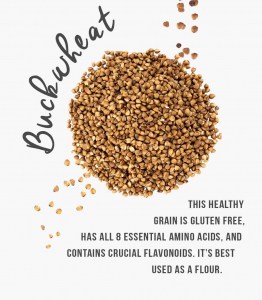 Here’s the catch about Buckwheat- it’s not actually even a wheat! In reality, it’s a fruit seed from a buckwheat plant. We refer to it as wheat because well, “we call em’ like we see em’. ” It’s gluten free, has all 8 essential amino acids, and contains two crucial flavonoids: rutin and quercetin. Studies have even shown improvement with nerve functioning and easing of PMS symptoms. Buckwheat is best used in flour and for things such as pancakes, bread, and other baked goods. 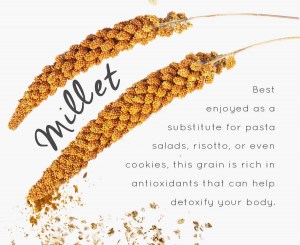 Discovered in Africa around 10,000 years ago, millet has been an ideal crop to grow due to its ability to grow in harsh conditions. Milletis improves heart health, controls cholesterol levels, and helps digestion. Additionally, many of the antioxidants in millet can help detoxify your body.  It’s best enjoyed as a substitute for pasta salads, risotto, and even cookies. 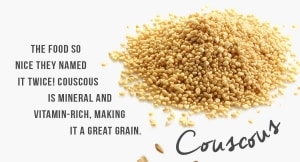 More than just “the food so nice they named it twice,” couscous is derived from Northern Africa and is made from small balls of durum wheat. The health benefits of couscous mainly stems from its heavy amount of mineral and vitamin content. Couscous also contains Selenium, which is believed to help protect against certain cancers. It also boosts the immune system, aids in the healing of wounds, and aids in the digestion process. Though couscous is technically pasta, it can be used in a variety of salads and puree’s such as this Mediterranean Lamb & Veggie recipe. 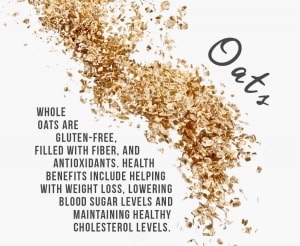 “Oat’s” about time you’ve added some whole oats into your morning routine! Sure you’ve known about oatmeal as a healthy breakfast meal (warning:stay away from instant oats because they are highly processed.) Whole oats are gluten-free, filled with fiber, and antioxidants. Health benefitsinclude weight loss, lowering blood sugar levels, and cholesterol levels. Mainly used for oatmeal, oats can be used in many baked goods and breakfast foods such as these Mixed Berry Overnight Oats. 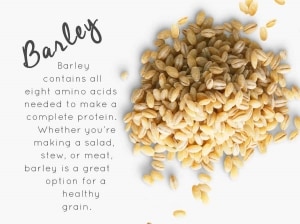 Are you “barely” getting enough protein? Barley is here to help! It contains all eight amino acids needed to make a complete protein[JK2] . Whether you’re fixing salad, stew, or meat, barley is a wonderful option for a healthy grain. It’s most commonly used in soup & would go perfectly with something hearty like this Tomato & Fennelrecipe. Because barley is technically grass, it’s rich in dietary fiber and helps regulate the intestine. It’s also a good source of Selenium, which helps protect your skin and keep its elasticity (who knew?!). 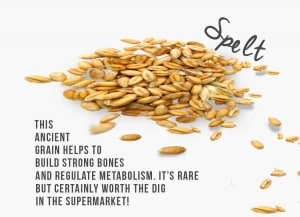 Speltis another grain variety that qualifies as an ancient grain. Health benefits include regulation of metabolism, creation of sex hormones, and building strong bones. Spelt flour can be used to make bread, pasta, and baked goods. It’s more rare than other grains on this list, but the heath benefits sure do make it worth the dig in the supermarket! Try adding a little spelt into your life the next time you’re baking – your mom tribe will be oh-so impressed! 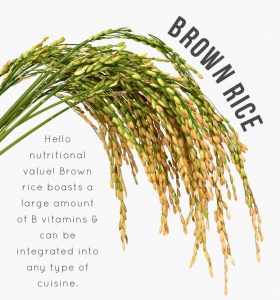 Want to know if brown rice healthy? You’ve come to the “rice” place! Unlike white rice, brown rice is the grain in its whole form. It’s harder to digest than white rice, but that’s only because most of the nutrition value is left intact. That’s right, brown rice has plenty of nutrition value! We know, shocker. It’s unique because of the large amount of B vitamins(it contains a whopping 90% of the B6 daily value for adults!) Brown rice can be integrated into pretty much any type of cuisine. It goes great in soups, the main part of your meal, or even as a side as seen in this simple Cilantro Lime Rice. 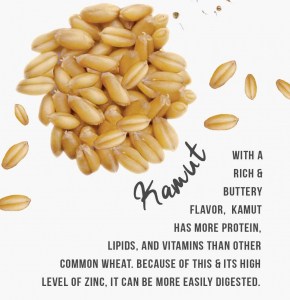 Stemming from khorasan wheat in Egypt, kamuthones an ultra rich and buttery flavor. It has more protein, lipids, and vitamins than other common wheat. Because of these factors & its high level of zinc, Kamut can more easily be digested. It also helps support brain health and balances hormones.  Like many other grains, kamut can be enjoyed in a variety of ways such as soups, salads, stir-fries, and baked goods. 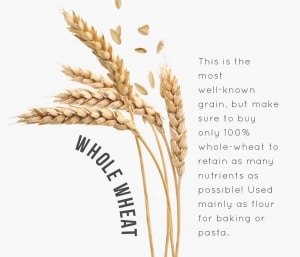 Ah yes, whole wheat- the type of grain you’ve probably heard about the most! Many food companies will try to be sneaky, utilizing words such as “multigrain” to give the illusion their products are whole wheat and healthy, but to retain as many nutrients as possible, purchase 100% whole-wheat. Mainly consumed as flour for baking or pasta, wheat might just be the only “germ” in the world that actually promotes health by helping to prevent cancers, reducing chronic inflammationand regulating weight!

Whether you’re going against the ‘grain’ or not, these Top 10 Picks are some of the most healthy alternatives out there. Contrary to some beliefs, incorporating grains into your diet can improve you and your family’s overall health in a variety ways. Lastly, even if you’re comfortable with your grain game right now, it’s always fun to integrate some new foods into your diet!